All the chemicals used were reagent grade, and water for preparing solutions was purified by deionization, distillation and filtration. An experimental electrolyzer device was constructed from a tank, two pumps, a filter having 25 nm diameter holes (Millipore), an electrolytic cell, and Teflon pipes [26]. The electrolytic cell had two electrodes and a membrane diaphragm that separated the cathode chamber from the anode chamber. The distance between the electrode and the diaphragm was 2.0 mm and the height of the chamber housing the electrolytic cell was 10 cm. The volume of the chamber was 10 cm3. The electrodes used in the present study were the titanium electrodes electroplated with platinum (Tanak Kikinzoku) and had an area of 50 cm2. The current density ranged from 0.01 to 0.60 A dm−2. The average linear flow velocity past the electrode ranged from 0.17 to 0.50 cm s−1. Nafion 117 (Du Pont) was used as a membrane diaphragm. This device has a construction similar to that of a commercial device. The solution was stored in a tank and the dissolved oxygen in the solution was purged with pure nitrogen gas by bubbling for 1 h. The solution was supplied to each electrolysis chamber through a corresponding filter, at a flow rate ranging from about 10 to 30 ml min−1. As soon as the effluent exited the cathode chamber, it was introduced into the cells for measuring the diameter of the hydrogen particles and the hydrogen content. The diameter distribution of hydrogen particles was measured by dynamic light scattering (DLS) (Otsuka Electronics, Laser Particle Analyzer PAR III type) and the hydrogen content was measured by using both a dissolved hydrogen meter (DH-meter, TOA Electronics, DH-103A type) and the chemical analysis method. The hydrogen content in electrolyzed water was determined as follows [26]. A solution (50 ml) containing 3 M (3 mol dm−3) sulfuric acid and 0.01 M K2CrO4 was poured into a glass-stoppered flask having a capacity of 300 ml, and 3 g of platinum powder was added. Oxygen inside the flask was exchanged for nitrogen by bubbling for 1 h. Effluent from the cathode chamber was poured directly into the flask and stirred for about 30 min to oxidize the hydrogen with K2CrO4. A portion of the solution was then titrated with iron(II) solution to determine the amount of K2CrO4 consumed. The hydrogen content was calculated on the basis of the decrease in K2CrO4. 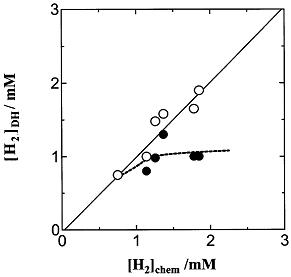 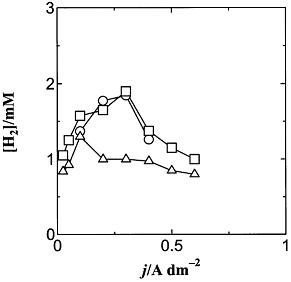 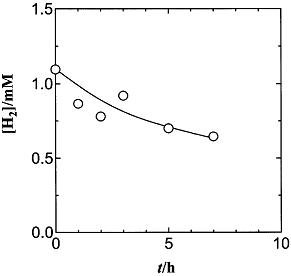 Fig. 3. Change in the dissolved hydrogen concentration with elapsed time in electrolyzed water, obtained from the electrolysis of 1.7 mM NaCl solution at 0.30 A dm−2. 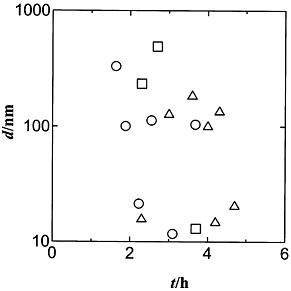 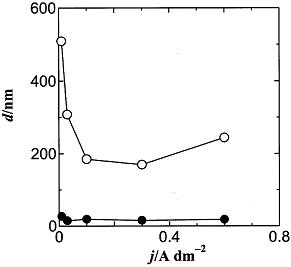 Fig. 6. Relation between the current density and the mean diameter of hydrogen particles in electrolyzed water obtained by the electrolysis of 1.70 mM NaCl solution filtered through 25 nm pores. 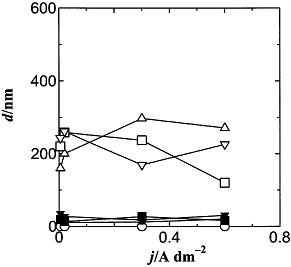 Fig. 7 indicates the relation between the current density and the mean diameter of hydrogen particles obtained by a filter having 250 nm pores instead of 25 nm pores. In the case of 250 nm pores the diameter is independent of the current density and ranges from 150 to 300 nm. A solution filtered through a filter having 250 nm pores might contain solid impurities smaller than the diameter of 250 nm. Therefore, the effects of solid impurities would mask the effects of the current density. Comparing the results of Fig. 6 with those of Fig. 7, it is found that the relationship between the mean diameter of the hydrogen particles and electrolysis conditions can be obtained only in the case of the 25 nm pore filter. 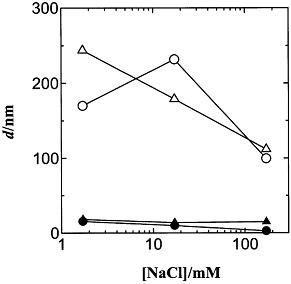 Fig. 8. The effect of NaCl concentration on the mean diameter of hydrogen particles. Current density of electrolysis (A dm−2): (white circle) and (black circle) 0.3; (white triangle) and (black triangle), 0.6.