The Kitchen Appliance That Could Actually be Killing You 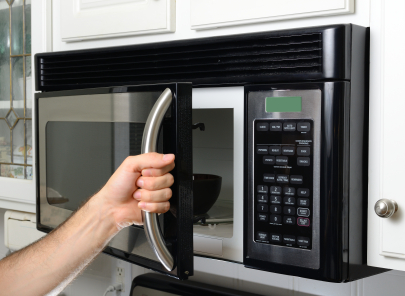 90% of Americans own a microwave oven. It’s a convenience that many find invaluable when managing their day-to-day busy lifestyles.

But did you know that–even when used properly–microwaves actually alter the molecular structure of your food, significantly decreasing the amount of nutrients and antioxidants and often creating carcinogenic toxins?

According to Swiss food scientist Dr. Hans Hertel, “There are no atoms, molecules, or cells of any organic system able to withstand such a violent, destructive power for any period of time. This will happen even given the microwave oven’s low power range of milliwatts.”

Dr. Hertel’s studies on the effects consuming microwaved food has on our blood revealed: increased cholesterol levels, decreased numbers of  red and white blood cells, production of radiolytic compounds, and decreased hemoglobin levels (which can indicate anemia). In fact, in 1991, one woman died when the blood she received in a transfusion was first heated up in the microwave.

Microwaves heat food by causing the water molecules in the food and beverages to vibrate violently at extremely high frequencies which creates molecular friction. Because water has a memory, this is bad news for your cells. Your body needs the water in your food, but it needs it delivered safely.

Think of it this way: If a UPS man delivered a box of fine crystal stemware to your door, would you still want the delivery if he first shook and stomped on the box violently, shattering the crystal into a million pieces?

In 1976, Russians actually banned the use of microwave ovens (that ban has since been lifted). They conducted 20 years of research which revealed  that carcinogens were formed from microwaving nearly all foods tested including meat, milk, grains, frozen fruits, and raw, cooked and frozen vegetables.

Additionally, a 2003 study published in The Journal of the Science of Food and Agriculture found that broccoli microwaved with a little water lost up to 97% of its beneficial antioxidants, whereas traditionally steamed broccoli lost only 11%.

Due to changes in agriculture, groundwater, and the increased use of pesticides and herbicides, our food–even when organically grown and consumed raw–is not as nutritionally sound as it once was. Don’t further sabotage its nutritional value by removing even more nutrients via a microwave oven.

Ask yourself, are you willing to sacrifice your health or the health of your family in order to shave a few minutes off of dinner preparation?

If not, try this: place a post-it note on your microwave display that says “In case of emergency” to serve as a reminder. Try alternate heating methods like a conventional oven, toaster oven, or boiling in a pot of water on the stove. Consider going raw for a few meals a week, explain the dangers of using a microwave to your housemates, and spread the word by sharing this article with a friend.

Cooking with ionized alkaline water from a Chanson water ionizer and soaking fruits and vegetables before consuming can help restore some of the lost minerals and antioxidants. For more information, visit www.chansonwater.com.