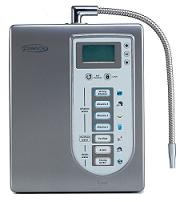 If you are in the market for a water ionizer you may have noticed that there is a significant difference in price for certain models and wonder what could possibly justify such a difference. In reality, all electric water ionizers make good alkaline ionized water, regardless of brand, and all non-electric ionizers make alkaline water. Here we will address where the differences really lie in an effort to help you make an informed decision:

You will receive the same health benefits of drinking and cooking with a $4,000 electric water ionizer as you will from an electric water ionizer which costs about half. The real reason that some models carry such a high price tag is because they are from a MLM (multi-level marketing) company which has to pay commission to eight different people with every sale. If you are anything like us, you will see that spending an extra $2,000 for the same product in order to pay bonuses to salespeople is ludicrous and will consider your other options.

All electric water ionizers produce three types of water with various pH levels: alkaline, filtered, and acidic. We drink the alkaline water with a pH of 8.0-9.5 for optimal health, use the filtered water for small children and taking with medication, and apply the acidic water on our skin and hair and can clean and disinfect our homes, cars and offices with it.

Because an electric water ionizer is such a versatile and multipurpose appliance, you could potentially save thousands per year by eliminating the need for bottled water, mouthwash, toner, half of all cleaning supplies, skin creams, etc. by investing in an electric water ionizer. Chanson water ionizers carry a price tag in the $1,300-$2,300 range which means that machine will likely pay for itself in 2-3 years and be one of the best investments you will ever make.

The difference in prices on the Chanson models are largely attributed to water flow rate and various bells and whistles like an undercounter model to save counterspace, ability to use all natural Himalayan rock salt to make strong acid water in areas with source water issues and a special cleaning system.

Because people started seeing the success that electric water ionizers were having, they looked for a way to cash in on the success cheaply and quickly. After all, if people were willing to spend up to $4,000 on an ionizer, wouldn’t people be willing to pay only 10% of that?

Because non-electrics leave out the key component of water ionization – electricity – they are not actually ionizers but alkalizers. They produce alkaline water which is only about two points more alkaline on the pH scale than the water that is run through them. Non-electrics do not produce filtered/purified/neutral water or the acidic water which is so valuable for skincare and cleaning purposes. In addition, the negative charge (low ORP) they produce is only about 1/3 of what an electric ionizer can produce which means you are only getting 1/3 of the antioxidants.

Even more disturbing, most non-electrics use mineral-stripping filtration which in most cases is provided by toxic De-Ionization (DI) Resin. When the resin has reached capacity (no way of knowing when without testing) it will actually allow the contaminants into your water and the resin itself may also leech into your water. They then attempt to re-mineralize the water with “secret ingredients” that are impossible to test or verify and have no testing to back them up or poof that they are safe for long-term human use.

A prominent salesman from another ionizer company (who has been in the industry for over nine years and had been drinking water from an electric ionizer) personally told us that he recently tried their new non-electric product exclusively for two months during which time the arthritis he has suffered from before discovering ionized water came back with a vengeance. Within two days of getting back on the electrically ionized water, the arthritis retreated completely. Our own health expert Ronnie Ruiz has used multiple NON electric ionizers exclusively for two week periods and has always noticed the superior health results of the ELECTRICALLY ionized water when returning to it, proving his theory that electricity is the key.

While the cost of these non-electrics may seem appealing, the decreased value they provide and the replacement costs actually add up to be less cost-effective than an a safer, more versatile, longer-lasting $2,000 electric ionizer purchase. For more information on the differences in electrics vs. non-electrics, please read our article Why Non-Electric “Ionizers” Don’t Compare to Chanson Water Ionizers.

We hope that helps clear up some questions. For more information, please visit www.chansonwater.com.