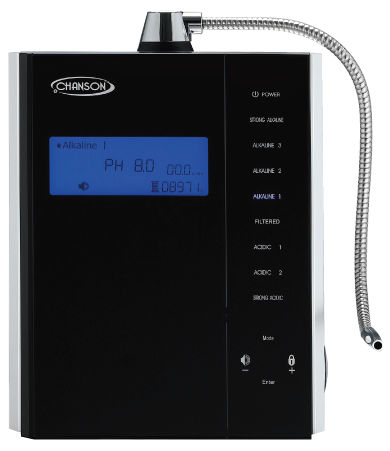 Electric ionizer machines are the original water ionizer products released on the world market that produce both alkaline and acid water through electrolysis, but now more and more non-electric “ionizers” seem to be popping up at a fraction of the price claiming to be just as good if not better than the Real McCoy.

Where did these non-electric “ionizers” come from? Well, it’s really simple. They came from people that want to sell a product and they saw the success of the electric ionizer water machines so they figured “Well, a water ionizer costs between $1,000–$2,000 and if I can make a water ionizer that sells for $300–$400, I’m going to become a multi-millionaire!”

The truth is that when water flows over rocks in nature, it naturally ionizes the water, and  our electric water ionizer machines are designed to re-create this process found in nature since not everyone has a waterfall in their backyard. When nature ionizes that water, it does so through ferocious movement and friction over metals and rocks in the river bed which creates an electrical charge amongst the minerals in the water. So then how can something that has no electricity duplicate the way nature makes ionized water through movement and ferocious friction?

The simplest analogy to understand the differences in the two products would be that an electric ionizer is like a water fall, and the non-electric “ionizer” is like a lake. Now where would you prefer to collect your drinking water from? The lake is a stagnant, dead body of water. It contains minerals; it contains things that might be of benefit to the body, but it’s not the living water that we know provides optimal hydration.

So let’s take a look at what benefits and alterations each product actually make to the water.

-Purified water for use with medication

-Adjustable levels of pH to suit the personal needs of you, your family and even pets

-Safe delivery of extra oxygen to your cells

-Tracking of when the filter needs to be changed

-NSF certificiation and he history to back them up – we have the testing, the animal studies, the human studies and are the ones that are used in hospitals all over the world

-A two point increase in pH level. This means that if your base water is only a 5 pH, you would only be bringing it up to a neutral 7 pH instead of alkaline water (which would still be better than an acidic 5 pH but important to note). Also, if you are using a base water with a pH of 8 or higher–there are actually quite a few areas around the United States where the tap water is a 9 pH–you could potentially be raising the alkalinity above the recommended 9.5 pH level.

-Mineral-stripping filtration which in most cases is provided by De-Ionization (DI) Resin which is a toxin that’s basically Super Glue and tar mixed together. When the resin has reached capacity (no way of knowing when without testing) it will actually allow the contaminants into your water and if it’s a low-quality resin the resin itself will also leech into your water. We asked eight water experts who have been in the water filtration industry 10-30 years what their opinion on DI Resin for drinking water products was. Every one of them answered by saying, “DI resin is the nastiest stuff out there and I would never drink a glass of water that’s passed through it.”

-Uncertified claims of microclustering the water

The only non-electric product we offer is our AlkaTraveler Stick (ATS) which is best described as a portable alkalizer, not an “ionizer.” It is the ONLY product in its category to pass the NSF safety tests in the USA and is safe for long-term use. The ATS contains only natural ingredients (calcium, vitamin C, tourmaline and magnesium) and is not a filter so it should not be used with unfiltered tap water. It is priced at $89, which is a far cry from the $300-$400 that competitors charge for their non-electric “ionizers.” Its design is more compact and convenient than competitor models and comes in a carrying case that can easily fit in your pocket.

For more information, please visit our web site at www.chansonwater.com.