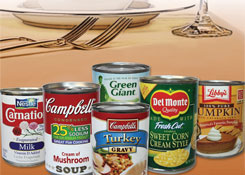 A new report released by the Breast Cancer Fund documents the presence of the toxic chemical bisphenol A (BPA) in canned foods used to prepare a typical Thanksgiving meal.

“Preparing your Thanksgiving dinner with these products can deliver a concerning level of BPA,” said Jeanne Rizzo, president and CEO of the Breast Cancer Fund. “How many more Thanksgivings will families have to worry about this uninvited guest before manufacturers finally decide to take it out of cans?”

BPA is used to make, among other things, the epoxy-resin linings of metal food cans. The lining forms a barrier between the metal and the food which helps to prevent bacterial contamination. However, the toxic chemical can leach from the resin and make its way into food. BPA has been linked in laboratory studies to adverse health effects such as breast and prostate cancer, infertility, early puberty in girls, type-2 diabetes, obesity and attention deficit hyperactivity disorder.

For this report, the Breast Cancer Fund sent 28 canned food items—four cans of each product tested—to Anresco Laboratories, an independent testing laboratory in San Francisco. The testing revealed tremendous variability among cans of the same product made by the same company, which is consistent with other product testing data. For instance, BPA levels in Del Monte creamed corn ranged from non-detectable to 221 parts per billion, and levels in Campbell’s Turkey Gravy ranged from 5 to 125 ppb. According to scientists at the Breast Cancer Fund, these inconsistencies might be explained by variations in the canning processes across facilities and batches, as well as storage and transportation conditions.

“Consumers have no way of assessing BPA levels just by looking at cans on supermarket shelves,” said Gretchen Lee Salter, policy manager at the Breast Cancer Fund. “The findings of this report highlight the urgent need to remove BPA from food packaging so that shoppers can be confident that the food they are purchasing is safe for their families—not only on Thanksgiving, but every day.”

The tests detected no BPA in any of the four cans of Ocean Spray Cranberry Sauce. The company has stated that while it does use BPA in its cans, independent tests also indicate no leaching of BPA into the food.

“We know from recent research that a BPA meal creates a spike of this estrogenic chemical in the blood,” said William Goodson, M.D., a breast cancer surgeon and senior clinical research scientist at California Pacific Medical Center Research Institute, who in September published a study showing that BPA causes non-cancerous cells to grow and survive like cancer cells. “Natural hormones work by spikes, so this is exactly what you don’t want, especially in young kids, who shouldn’t have any estrogenic spikes at all.”

At the public policy level, 11 states have banned BPA from baby bottles and sippy cups, and three of those states have also banned it from infant formula and baby food. The Breast Cancer Fund is also supporting pending federal legislation authored by Rep. Ed Markey, D-Mass., that would ban BPA from all food and beverage containers including canned foods.

Visit www.breastcancerfund.org/thanksgiving for the full report and Myths and Facts about BPA in Canned Foods, combating the common industry arguments in favor of BPA.

For our suggestions on how to prepare a more alkaline and BPA-free holiday meal click here.

Chanson Water recognizes the importance of keeping BPA out of not just food but our water as well, which is why were a pleased to offer a BPA-Free Water Bottle.

For more information on the importance of living a healthy alkaline lifestyle, visit our web site at www.chansonwater.com.